Samara Academic Opera House is one of the biggest Russian musical theatres. The theatre was opened on the 1 of June, 1931 with the Mussorgsky’s opera “Boris Godunov”. Its institutors were outstanding Russian musicians: Taneyev’s and Rimsky-Korsakov’s pupil, conductor and composer Anton Aikhenvald, famous Russian conductor Isidor Zak, director jf the Bolshoi Theatre Iosif Lapitskiy. The history of the theatre also has such names as conductors Saveliy Bergoltz, Lev Ossovsky, director Boris Ryabikin, singers Aleksandr Dolskiy, People’s artist of the Ukrainian Soviet Socialist Republic Nikolai Poludennyi, People’s artist of Russia Victor Chernomortsev, People’s artist of the RSFSR, future soloist of the Bolshoi theatre Natalia Shpiller, Larisa Boreiko and many others.Ballet company was headed by the soloist of the Mariinsky theatre, a participant of the legendary Diaghilev Seasons in Paris Yevgenia Lopukhova. She found the series of outstanding Petersburg choreographers, who headed our ballet in different years.

The theatre is expanding its repertoire fast. Stage versions dating back to the 30ies are those of opera and ballet classics: operas by Tchaikovsky, Glinka, Rimsky-Korsakov, Borodin, Dagomyzhsky, Rossini, Verdi, Puccini, ballets by Tchaikovsky, Minkus, Adan. 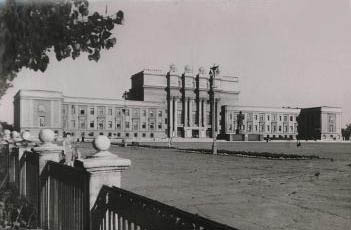 In accordance with modern requirements, the theatre also pays a lot of attention to contemporary repertoire. In pre-war times, for the first time in the country, there were premieres of the operas “The Steppe” by A. Eikhenwaldt, “Tanya” by G. Kreitner, “The Taming of the Shrew” by V. Shebalin and others. Brave
creative experiments, turning to unknown or undeservedly forgotten masterpieces is typical for the theatre in post-war years as well. There are dozens of names on its playlist, including classics of XVIII century (“Medea” by Cherubini, “Secret Marriage” by Chimarosa), seldom performed works by Russian composers of XIX century (“Servile” by Rimsky-Korsakov, “The Magician” by Tchaikovsky, “The Christmas Tree” by Rebikov), as well as samples of Euro
pean vanguard art of XX century (“The Dwarf” by von Tsemlinsky, “Wedding” by Stravinsky, “Harlequin” by Buzoni).

Co-operation with contemporary Russian authors is a special page in the book of the theatre’s life. Their works were trusted to our theatre by outstanding Russian composers Sergei Slonimsky, Andrei Eshpai, Tikhon Khrennikov and Andrei Petrov.

An essential event, the importance of which goes far beyond the scope of Samara’s cultural life, was world premiere of the opera “Visions of Ivan the Terrible” by Slonimsky, which was staged by one of the greatest musicians of XX century Mstislav Rostropovich in co-operation with outstanding masters – director Robert Sturua and designer George Alexi-Meshishvili. 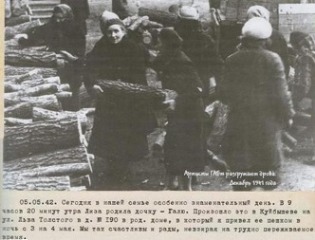 At the time the Great Patriotic War began cultural situation in the city changed dramatically. In October 1941 State Bolshoi Theatre of USSR (SBT) was evacuated to Kuibyshev (“the reserve capital”). Artistic initiative went to the most outstanding masters of Soviet opera and ballet theatre. During the period from 1941 to 1943 SBT staged 14 operas and ballets in Samara. The Samara Opera House stage hosted the world-famous singers Ivan Kozlovsky, Maxim Mikhailov, Mark Reizen, Valeria Barsova, Natalia Shpiller, the ballerina Olga Lepeshinskaya, the orchestra was conducted by S. Samosoud, Y. Feier, A. Melik-Pashaev. 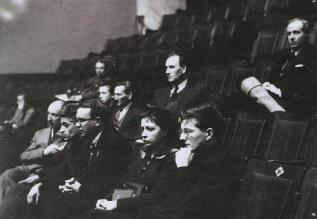 SBT troupe lived and worked in Kuibyshev till summer of 1943. As a sign of gratitude to local people for their help in those hard times, the great theatre’s actors and actresses came to the bank of the Volga more than once also after the war, to show their n
ew works and historical repertoire devoted to war times. In 2005, to celebrate the 60-th anniversary of Victory in the Great Patriotic War, Bolshoi Theatre of Russia troupe presented Samara’s music lovers with a special gift –a new meeting with their art. Performances and concerts during that tour (the ballet “The Bright Spring” by Shostakovich, the opera “Boris Godunov” by Mussorgsky, the Great Victory Symphony – the 7-th Symphony by Shostakovich, concerts of brass band and of opera soloists) – enjoyed a triumphant success.

As General Director of Bolshoi Theatre of Russia A. Iksanov noted: “For all Bolshoi Theatre troupe this tour is one more chance to express our deep gratitude to Samara citizens for giving a second home here to Bolshoi Theatre in the hard times of the war.” 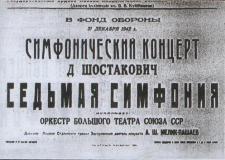 Top of Samara’s music life in XX century, a truly historic event was performance on Samara Opera Theatre stage of the 7-th (“Leningrad”) Symphony by Dmitry Shostakovich. That genius work of art, which reflected tragic war time events and communicated the greatness of Soviet warriors’ deeds, was completed by the composer in December 1941 when he lived in Samara having been evacuated here, and it was first performed by the Bolshoi Theatre orchestra conducted by Samuel Samosoud on the 5th of March 1942.

11 performances were shown in the country’s capital. Their list may make a modern music lover’s admire – “Macbeth” by G. Verdi, “Mary Steward” by S. Slonimsky, “Porgy and Bess” by J. Gershwin, “Iwailo” by M. Goleminov, “Hussar Ballad” and “Love for Love” by T. Khrennikov, “Remember!” and “Angara” by A. Eshpai”, “Romeo and Julia” by G. Berlioz, “Nutcracker” by P. Tchaikovsky, “The Tsar’s Bride” by N. Rimsky-Korsakov. Two of these performances -“Mary Steward” and “Hussar Ballad” – were awarded prizes as a result of that tour.
Samara Academic Opera House –Theatre of the 3rd Millennium
The theatre lives an active life. Its reconstruction has been completed, new names appear on the playlist, singers and dancers win at prestigious international and national contests, new creative powers flow into the theatre’s troupe.

The theatre’s troupe is proud of high concentration of talented and bright creative individualities in it. Distinguished Artist of Russia Vasily Sviatkin is a soloist not only of Samara Opera House, but of Moscow “New Opera Theatre named after E. Kolobov” as well. Anatoly Nevdakh takes part in Bolshoi Theatre performances, Andrei Antonov performs in many theatres in Russia and other countries and enjoys a success. The theatre’s artistic level may also be proved by the fact that a great number of “titled” actors and actresses work here – 5 People’s Artists, 19 Distinguished and Honored Artists, 20 international and national contests’ prize awardees.

Since 2008 the theatre’s ballet troupe level has become much higher. The theatre’s company was headed by Distinguished artist of Russia, awardee of the international ballet-masters contests, awardee of the Maurice Béjart’s prize, professor, owner of the title “Outstanding Artist of Perm Ballet of XX Century” (nomination “Male Dancer”) Kirill Shmorgoner, who had been a jewel of Perm Theatre ballet troupe for a long time. K. Shmorgoner invited a big group of his pupils to Samara Opera House – graduates of one of the country’s best educational institutions – Perm Choreographic School. Young ballet dancers Catherine Pervushina and Victor Mulygin were awarded prizes at the prestigious international contest “Arabesque”, a group of Samara dancers enjoyed a great success at National Festival “Delphian Games”.

Lately several premieres have been shown in the theatre, which have been much spoken about by music lovers: “Mozart and Salieri” by Rimsky-Korsakov, “Maura” by Stravinsky, “La Serva Padrona (The Servant Mistress)” by Pergolesi, “Eugene Onegin” by Tchaikovsky, “Rigoletto” by Verdi, “Madama Butterfly” by Puccini, the choreographic cantata “Wedding” by Stravinsky, the ballet “Futile Precaution” by Gertel. These performances are a result of the theatre’s active co-operation with masters from Moscow – from Bolshoi Theatre, New Opera – and from other Russian theatres.
Much attention is paid to staging musical fairytales for children. Artists of opera and ballet give concerts as well.

Among tour routes of the theatre are Bulgaria, Germany, Italy, Spain, China, different cities and towns of Russia. Intensive tour schedule of the theatre allows people living in Samara region to see its latest works as well.

Festivals are a bright page in the book of the theatre’s life. Among them is Classical Ballet Festival Named after Alla Shelest, international festival “Bass Voices of XXI Century”, “Five Evenings in Togliatti City”. In 2003 Classical Ballet Festival Named after Alla Shelest was awarded “Catherine the Great” Order, and in 2011 it became part of European Festivals’ Association. International Opera Festival named after Irina Arkhipova took place in 2012 for the first time. Due to the theatre’s festival initiatives, Samara music lovers have a chance to meet with the art of dozens of outstanding masters of Russian and foreign opera and ballet.

To celebrate its 80th anniversary, the theatre added the following performances to its repertoire: the opera “Prince Igor”, ballets “Don Quixote”, “Sleeping Beauty”, “Aniuta”, the operetta “Die Fledermaus (The Tick)” by J. Strauss, one-act ballets “Tango…Tango…Tango…” based on A. Piazzolla’s music, “Chopeniana”, the ballet “Nutcracker” by P. Tchaikovsky, a new version of the opera “Madama Butterfly” by G. Puccini, the ballet “Futile Precaution” by P. Gertel and L. Delibes, the ballet “Romeo and Juliet” by S. Prokofiev. In order to remember the beginning on the new level of its historical development, the theatre staged the opera “Boris Godunov” by M. Mussorgsky. Besides, the theatre plans to present a renewed version of the ballet “Armida Pavilion” by N. Tcherepnin, “La Bayadere” by L. Minkus – the traditional variant of Mariinsky Theatre, the ballet based on music by P. Tchaikovsky “Queen of Spades”. The 82nd season was opened by G. Verdi’s “La Traviata”, “Eugene Onegin” by P. Tchaikovsky which is very popular will come back to the stage, as well as G. Verdi’s “Aida”.

In the city’s central square you can see a tall massive grey building – according to art critics, “a grand monument of late “pylon style” amended by brutal classics”, “a bright sample of architecture of the 30ies”. Authors of the project are architects from Leningrad N. Trotsky and N. Katselenbogen, who won the contest for construction of a Palace of Culture in 1935. The theatre was located in the building’s central part. In the left wing there used to be a regional library for some time, in the right wing – a sports school and an art museum.

In 2006 reconstruction of the building began, and this required finding another place for the sports school and museum. By 2010, which was the theatre’s jubilee season, the reconstruction was completed.

View on the map